Lacrosse is one of the oldest organized sports in North America. Lacrosse has its origins in a tribal game played by eastern Woodlands Native Americans and some Plains Indians tribes in what is now Canada. It became popular among non-Aboriginal peoples in the mid-1800s and was modified extensively by European immigrants to North America to create its current collegiate and professional form.

When the National Lacrosse Association of Canada was formed in 1867, it was the Dominion of Canada’s first governing body of sport. Lacrosse was confirmed as Canada’s official summer sport in 1994. The Canadian national lacrosse teams (men and women) rank highly in world standings, both in field and box lacrosse.

The design of this lacrosse head pays tribute to the history of the sport. The following case study illustrates the design development of a lacrosse head inspired by the game’s origins.

One of the biggest challenges during product design was working around existing patented lacrosse heads. We wanted to design an ergonomic and beautiful head, but at the same time we were faced with restrictions from our patent lawyers.

Our mood boards were inspired by the First Nations. This gave the product design team endless possibilities for design ideas. Our industrial design and product design teams used nature, leaves, wood grain, bark, and texture as the initial concepts. First Nations’ stone tools, spears, and weapons were used for the second set of concepts. Feathers, tents, and decoration pieces were the inspirations for a third set of design concepts. The final set of concepts was inspired by totem poles, sculptures, and art pieces. 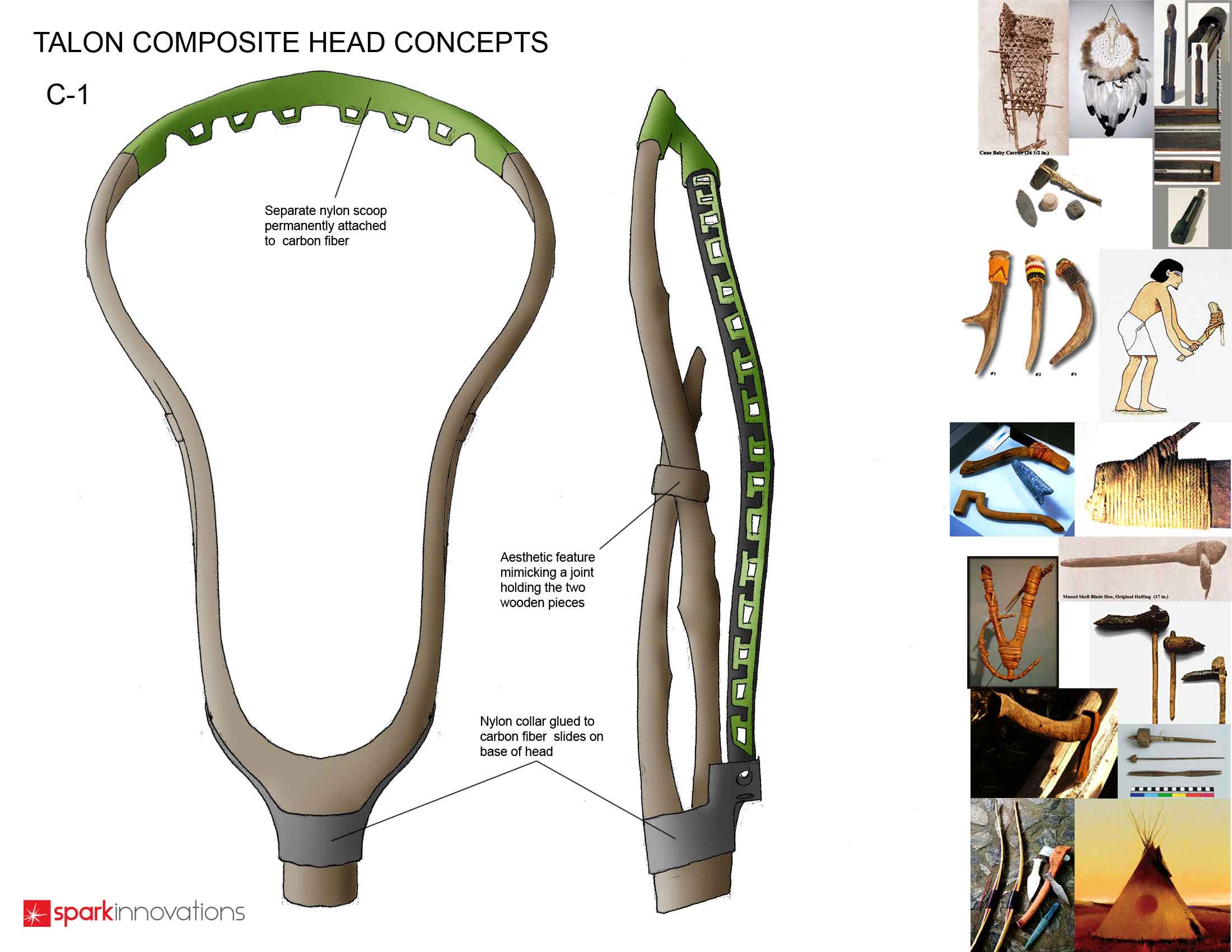 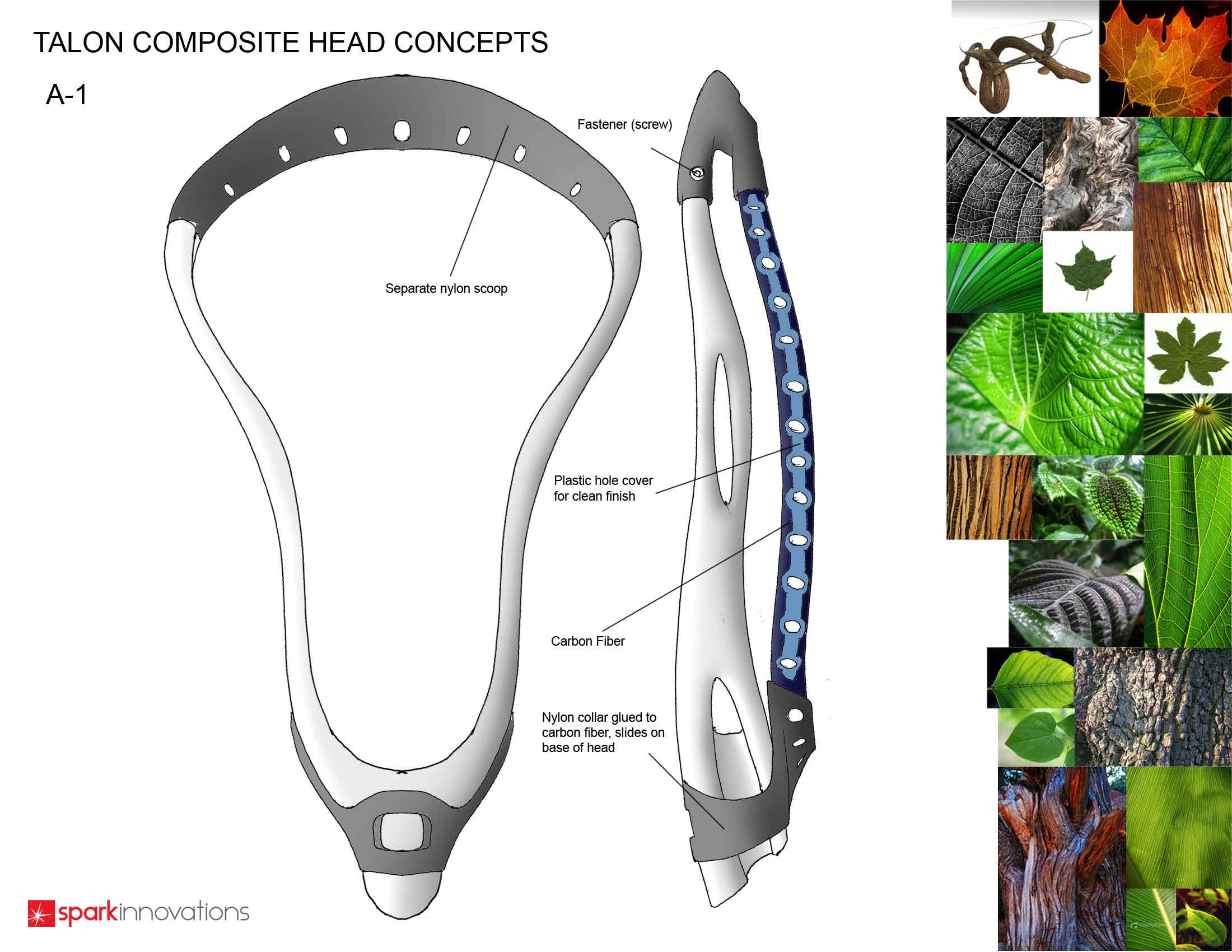 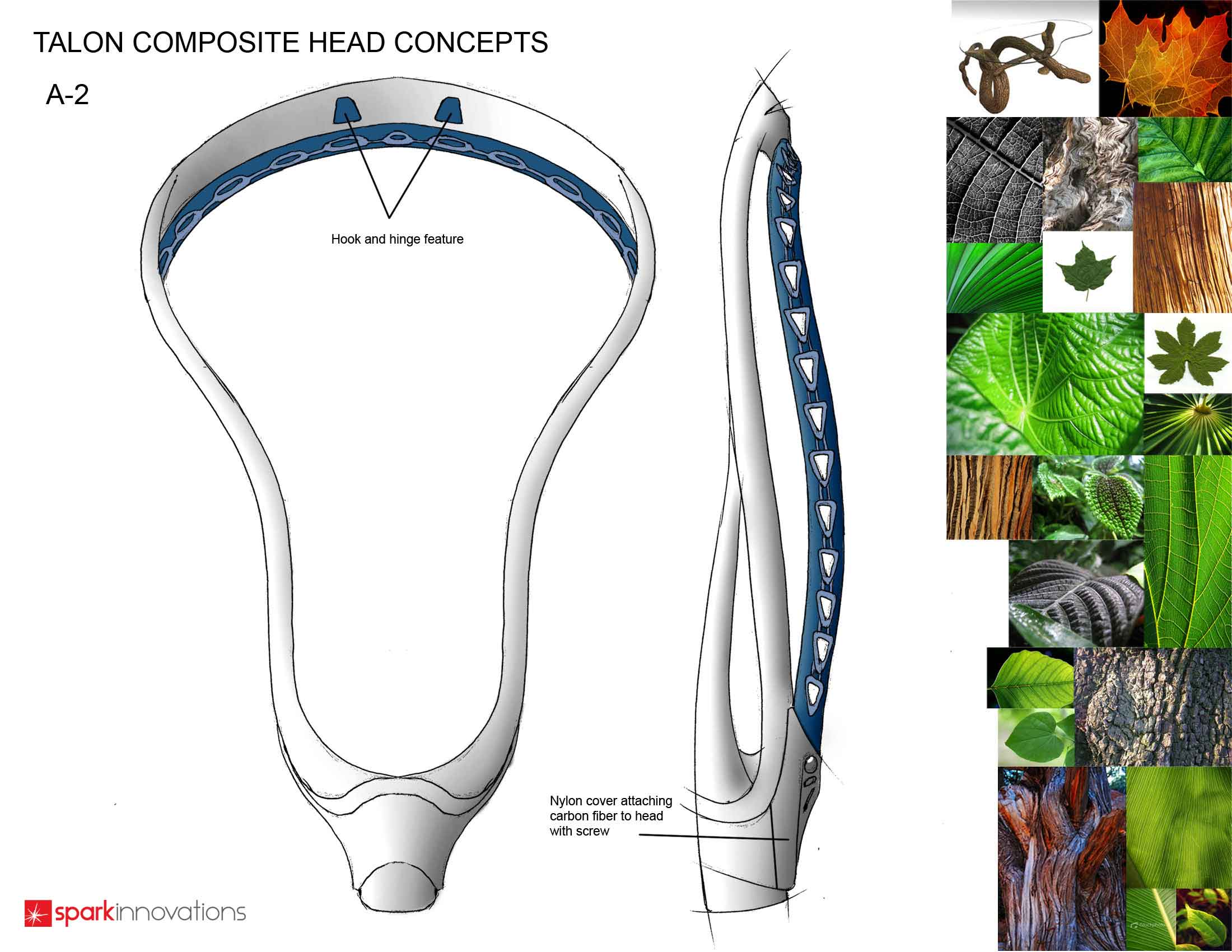 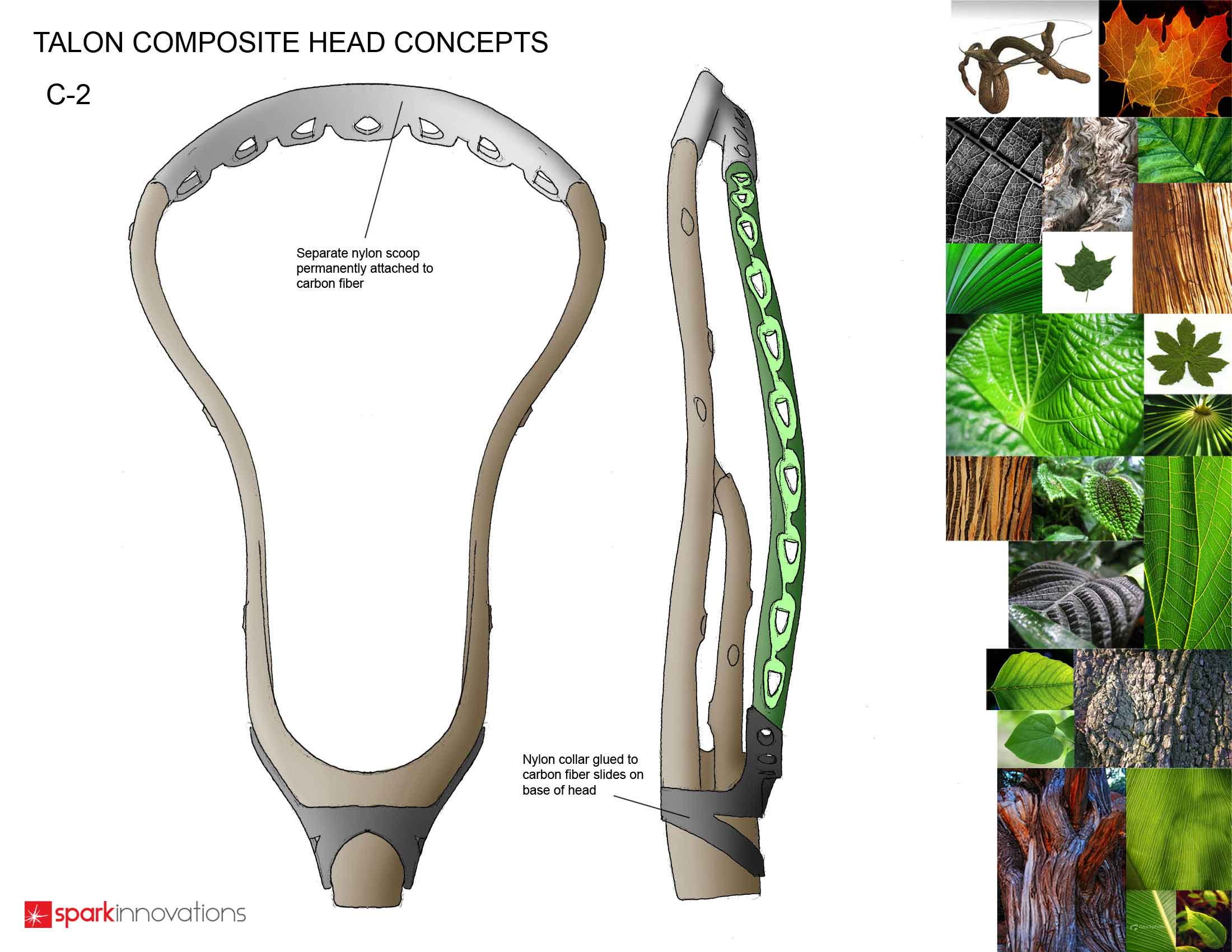 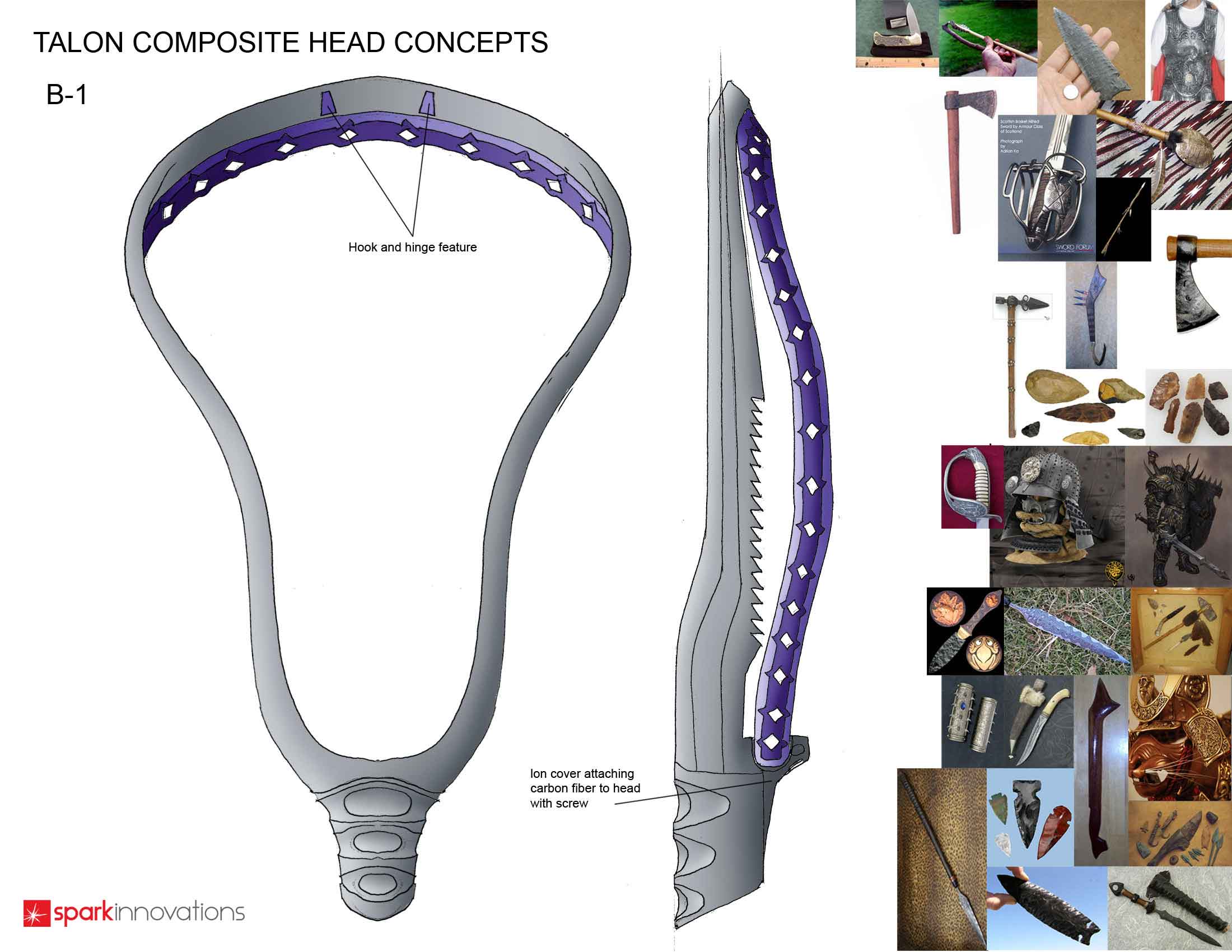 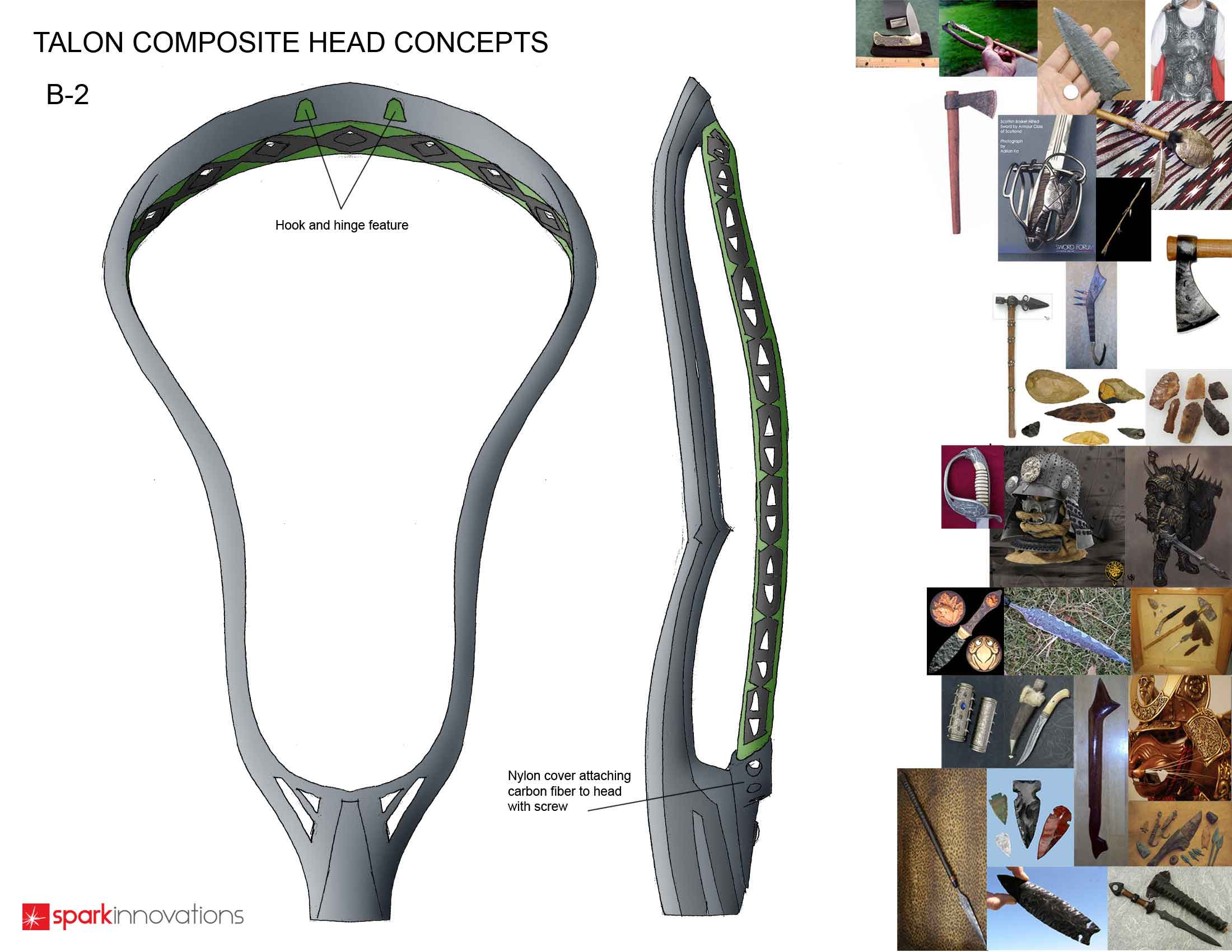 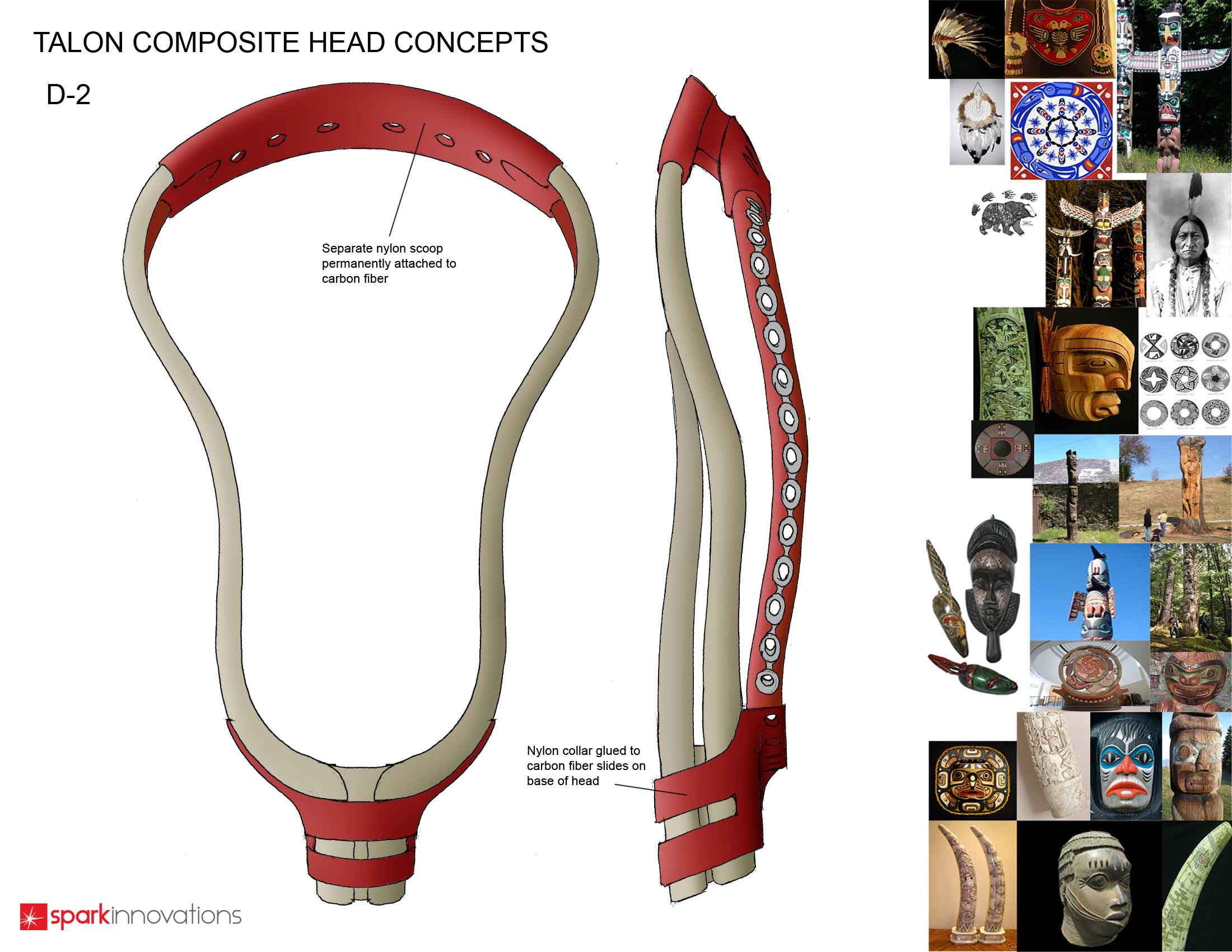 Once the concepts were approved, the team of mechanical engineers here at Spark Innovations took the project to 3D CAD for basic modeling. Their focus with this model was structural. The details of the finishes were dealt with by our product design team of industrial designers.

With the basic structural model in the 3D system, our team of industrial designers worked on the details of the pattern chosen by the client. Their focus now was to recreate the graphics onto the 3D model.

Once this model was ready the 3D and 2D drawings were sent to the patent lawyers for revisions. Unfortunately, the feedback was not promising. We were going to have to alter all the CAD drawings, as they were infringing on existing patents. The product design went back and forth with all the changes and details altered. Slight changes in the heights and the angles were essential in order to avoid infringing on any existing patent. At the same time, we wanted to keep the initial concept as close as possible to what the client had chosen. This was one of the biggest challenges this project faced. Our product design team of industrial designers and mechanical engineers is used to working with the inventors directly; if they make changes we make just the slightest modifications to ensure that the parts are not being compromised during the manufacturing process. In this case the changes that were required would modify the design and the structure that had been approved initially. After revisions and changes we finally reached that ideal fine line between aesthetics, proper function, and infringement claims. 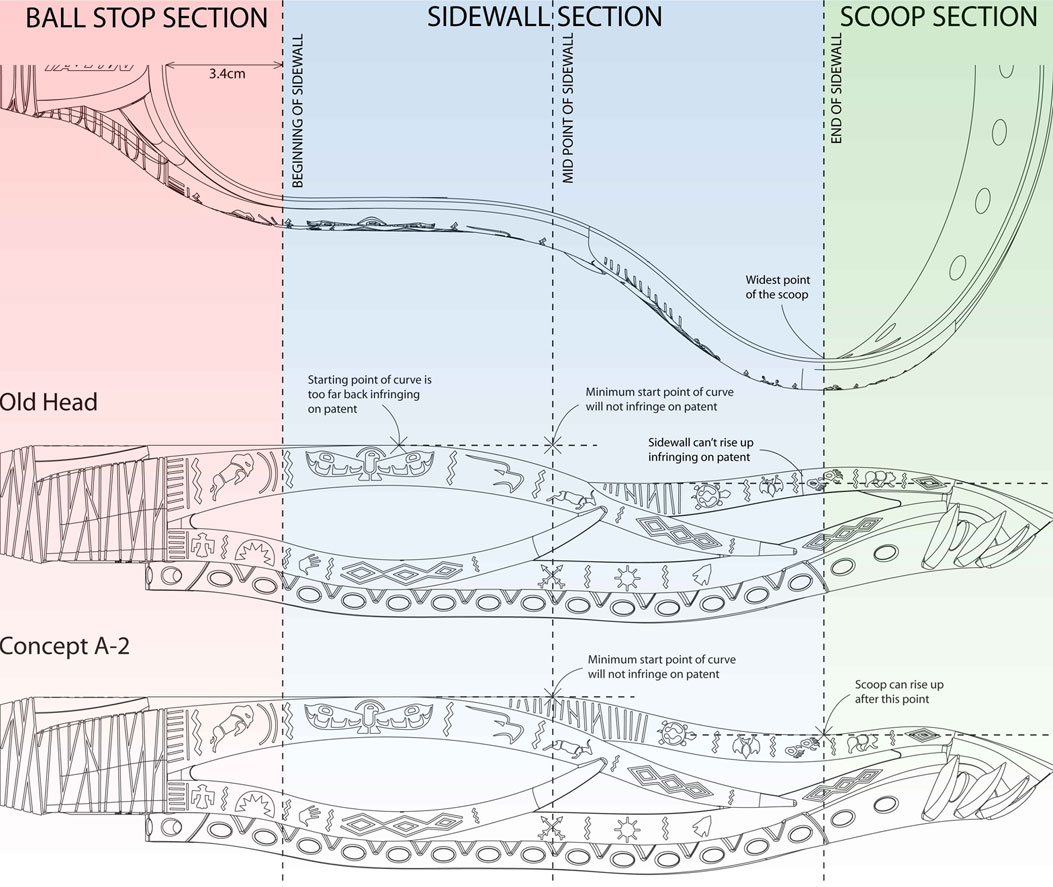 Once the challenges were resolved the product design team sent the model to 3D print. It was printed in a PolyJet 3D Printer, one of the most advanced and effective additive manufacturing 3D printing technologies. It produces precise, finely detailed, durable models. Once we received the 3D model of the lacrosse head our industrial design team worked on a brush paint study. They needed to come up with an ideal finish sample that could be sent to the factory in China for them to reproduce. They were looking for a rustic, old feel that would work nicely with the engraved figures.

Once we had everything in place and the mechanical engineers had prepared the model for production, the lacrosse head was sent out for tooling. The productions of this form required injection molding as the manufacturing process. We received the first samples but unfortunately we ran into some issues.

The parts were sent out for structural tests and they all failed. They were all breaking and the factory told us that the product had engineering problems. We put the part to several tests, including a mold flow analysis to suggest the injection point, and an impact test to define the most delicate points of the structure. After testing we realized that the place where the material (Nylon 66) was breaking contained air pockets. This helped us realize that the problem stemmed from the material the factory was using. With this corrected we finally received the final samples that were ready to go to production. 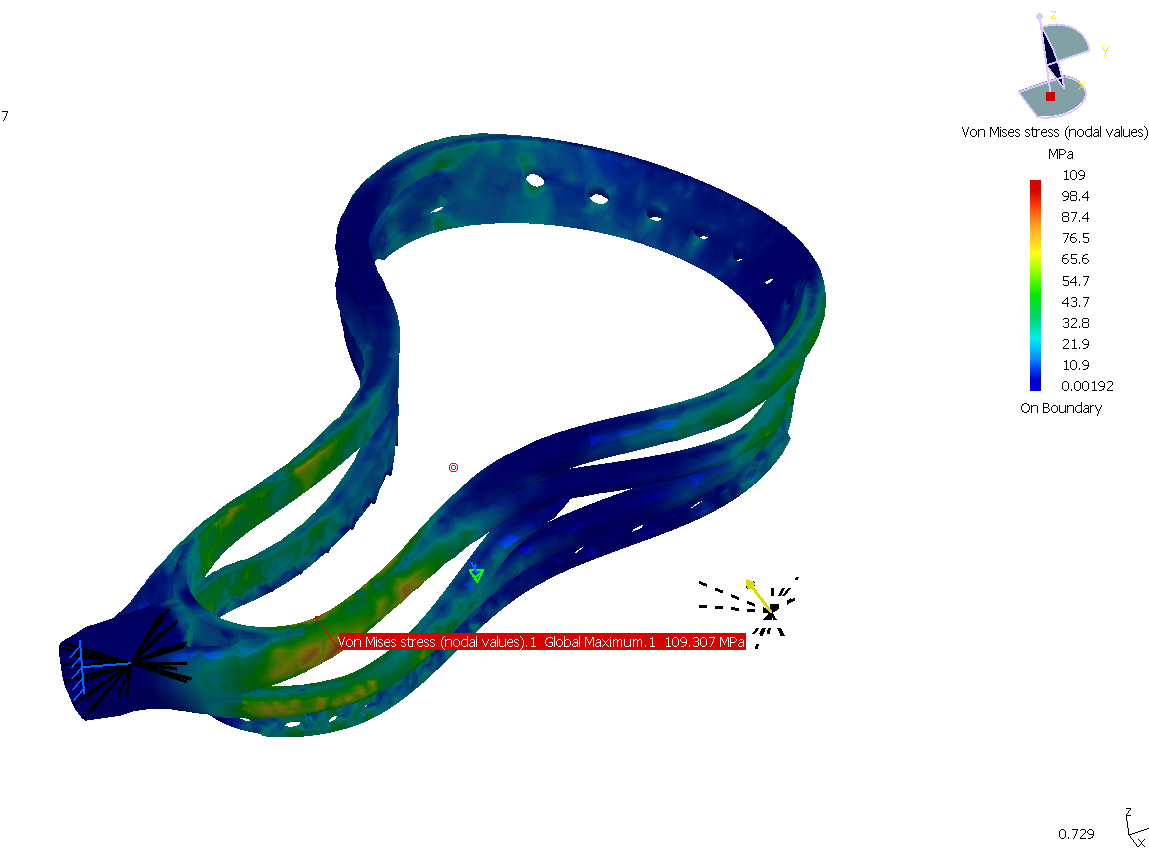 The Talon Lacrosse Head is a great example of a product that had to meet many requirements and overcome many challenges until completed. Issues with aesthetics, patent infringements, strength, and manufacturing were all solved by the Spark Innovations product design team. 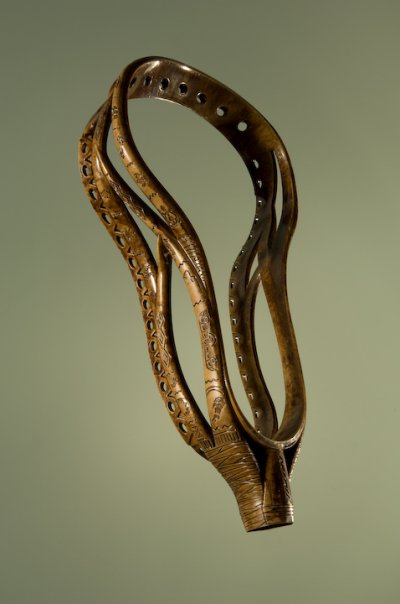 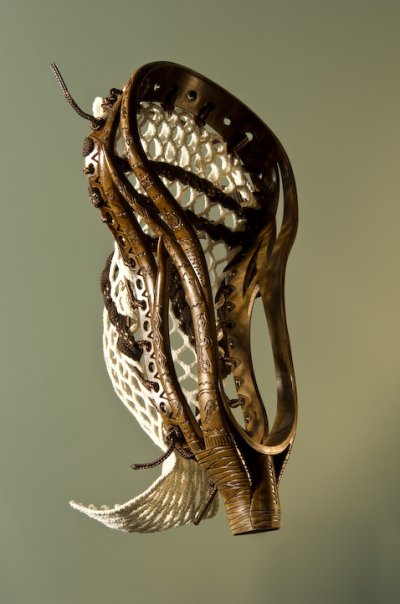