Happy to be alive – Garth Holding 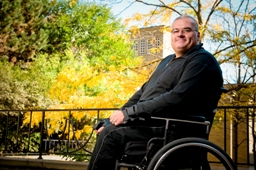 Four years ago, Garth Holding and his wife Joanne were returning from a shopping trip in Organeville when their SUV was struck by another vehicle in a head-on collision. Joanne escaped with minor cuts and bruises, but Garth sustained multiple life-threatening injuries.

It took emergency crews two-hours to free Garth from the wreckage. To save his life, he was airlifted to Sunnybrook’s John & Liz Tory Trauma Centre for emergency surgery. Sunnybrook is part of the provincial base for the Land and Air Ambulance Program; the Tory Centre receives the majority of air ambulance transfers, making it the first source for trauma care in the GTA and Ontario.

Once at Sunnybrook Garth was immediately assessed by the trauma team led by world-renowned trauma surgeon and Trauma Program Chief, Dr. Fred Brenneman. Multiple surgeries had to be performed to repair Garth’s injuries, which included a bruised heart, punctured lung, torn intestines and significant fractures to his pelvis and left arm.

Since 2004, Garth has needed more than 15 surgeries and numerous follow-up medical appointments, each bringing him closer to a full recovery. The number of injuries sustained alone makes Garth’s case unusual. That they were all treated at one facility, Sunnybrook, makes it exceptional.

“Without the air ambulance program and the trauma centre’s amazing staff, my chances of survival would be next to nothing,” explains Garth. “I had multiple injuries – many of them life threatening. No other hospital could have handled that kind of emergency.”

While Garth has healed amazingly well, he continues to require the care of our multidisciplinary team of specialists.

“Sunnybrook is equipped and staffed to handle difficult cases like mine,” notes Garth. “The level of care offered to me would not be possible without the support of the wonderful donors to the Trauma, Emergency & Critical Care Program.”

Sunnybrook is doubling the current capacity of the trauma and emergency department to offer our patients and their families the greatest comfort and care. The expanded facility will provide a technologically advanced environment for staff to perform their lifesaving work.

If you would like to share your story or make a donation in support of the Trauma, Emergency & Critical Care renovations visit www.sunnybrookfoundation.ca.