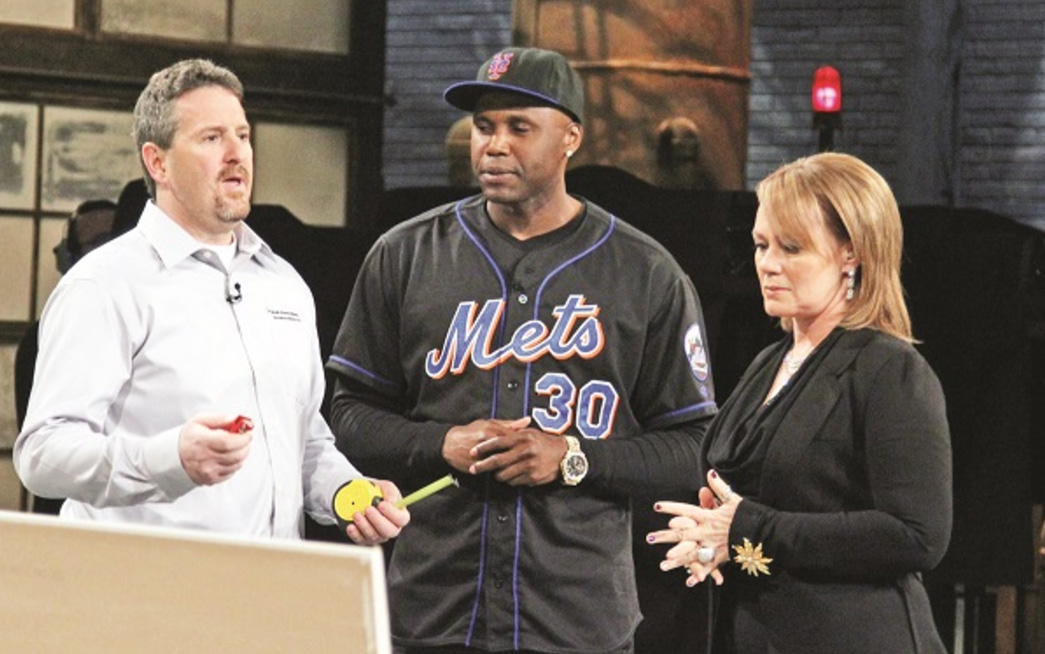 Inventors like Adam Pauze and Cliff Floyd are worth doing business with! Congratulations to these innovators for being a great inspiration to new inventors and startups! They are raising money for the Aurora Food Pantry while exposing their invention to people! GREAT JOB! Spark is privileged to have been the Product Development team behind the Drywall Axe!

Adam Pauze freely admits he was “sweating bullets” as he prepared to enter the Dragon’s Den this fall, but after emerging unscathed, marking a significant business achievement this week, he is looking forward to enjoying his television debut with the community next week.

The Aurora resident will appear in next week’s episode of the popular CBC series to pitch his invention, the Drywall Axe, a tool for cutting drywall and other materials which combines a sharp blade with a measuring tape.

The Drywall Axe has been on shelves in Canadian Tire for over a year, but it has been a long-held dream to bring his products to American shelves as well. As of Tuesday, Mr. Pauze’s product is now due to hit the shelves of Lowes U.S. in time for Father’s Day next June.

He has come a long way since cutting his arm with the tools at hand while working on a drywall project with his brother-in-law. After a sleepless night or two, he came up with his innovation.

“After researching, there were a couple of different items for cutting drywall which were a little bit safer than the old fashioned way, but there was nothing for measuring and cutting at the same time,” says Mr. Pauze. “Since December 2013 I have sold over 30,000 units in Canadian Tire. After signing the contract [bringing the product to Lowe’s] this week, I feel awesome. It is three years of hard work. It is now starting to gain momentum, and hopefully it keeps rolling on.”

Mr. Pauze had this objective in mind when he prepared to go on Dragon’s Den. While his product was already on Canadian shelves, he says he hoped the expertise and contacts from the Dragons would help him crack that elusive market. It was not their money he was looking for, but their skills.
Although armed with his product’s numbers, he says the initial experience of going in-studio was “absolutely terrifying.”

Today, Mr. Pauze remains mum on how he fared on Dragon’s Den, responding to all questions on the feedback he received from the business experts with the slightest of smirks. The fact that Aurora’s Boston Pizza is hosting a viewing party for next Wednesday’s episode, he adds, should not be taken as an indication of success with any particular Dragon!

He invited members of the public to come and join him, and business partner, Major League Baseball player Cliff Floyd, at Boston Pizza on First Commerce Drive from 7 p.m. to 9 p.m. Mr. Floyd will be signing autographs and taking pictures, and signed baseball jerseys are going to be raffled off to benefit the Aurora Food Pantry. Potential revellers are also asked to bring a non-perishable food donation.

“The more the merrier,” says Mr. Pauze. “We want to raise a lot of money for the Aurora Food Pantry, plus we want to get the product out there and get people to Canadian Tire to buy it.”