Iso Acoustics on the Dragons Den 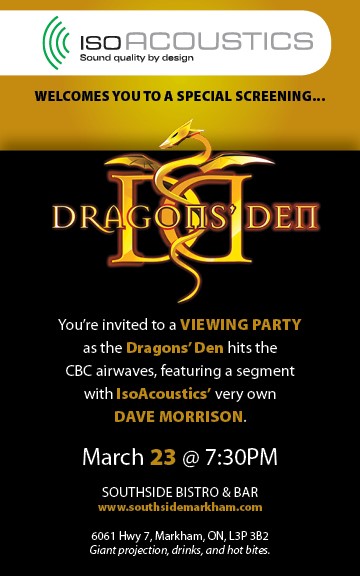 Iso Acoustics on the Dragons Den

Today we are very proud to announce that our client David Morrison with his Iso Acoustic participated on the Dragons’ Den and his pitch will be airing on March 23rd 2016, at 8:00pm on CBC Television.

Dragon’s Den is a Canadian reality show where entrepreneurs have an opportunity to pitch their products or business ideas to well know investors called The Dragons. In exchange for their expertise and business connections, the business owners potentially give up a part of their company to the Dragons in the hopes of taking their ideas to the next level.

Iso Acoustics at the Dens

David Morison, invented the Iso Acoustics. A specialized line of speaker stands that provide superior acoustic isolation and enhance the sound clarity of any speakers including studio monitors, home theatre systems and sound reinforcement. This specialized line of speaker stand products were designed for the audio professional, music hobbyist, audiophile and music lovers.

The patented approach is based on years of experience in the design and construction of radio and television studios. The driving force is Dave Morrison, closely involved in planning and building radio and television studios at the Canadian Broadcasting Corporation for close to 20 years. Dave Morrison was part of the design team faced with the challenges of building the world’s largest multi-media center in Toronto: over 1.72 million square feet, with recording studios for drama, music, and chamber ensembles, special effects, radio and television shows. The experience gained at CBC has become your gain with IsoAcoustics adjustable audio speaker stands.

Good luck and we continue to wish you great success with Iso Acoustics.

Three new dragons entered The Den last season and we can’t wait to see what happened with Dave Morrison Pitch!

We will keep you posted on what happened!