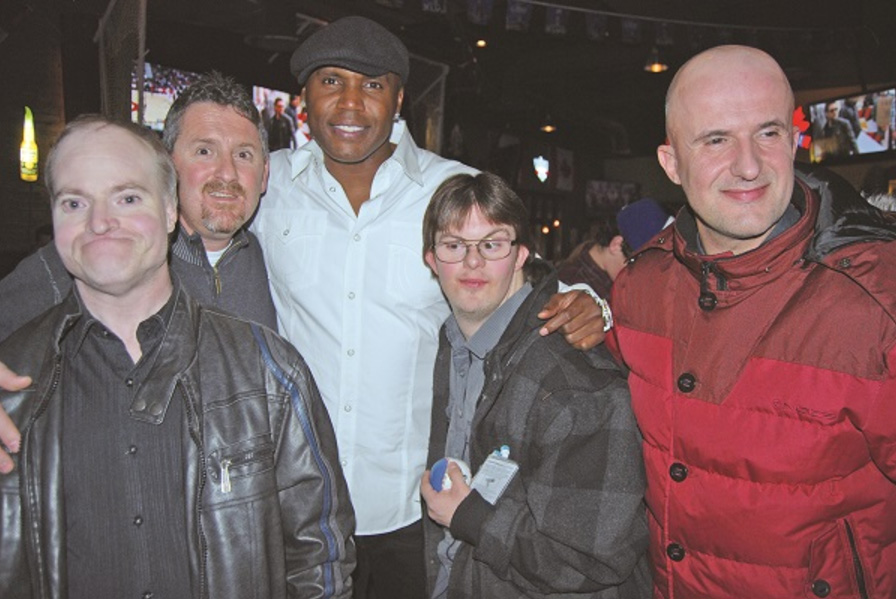 This is something to celebrate! The Drywall Axe gets offers from four out of five Dragons! CONGRATULATIONS!!! Spark Innovations is very honoured to have been the industrial designs and mechanical engineering team behind the product development. Here are some of their comments during the celebration.

Inventor Adam Pauze and business partner, retired baseball player Cliff Floyd, came out of the hit CBC series with offers from four out of five Dragons for the Drywall Axe, a three-in-one tool that combines a blade, tape measure, and writing utensil, which has been a good seller at Canadian Tire, its exclusive Canadian retailer.

Although they kept their decision to go with the offer from Arlene Dickinson under wraps until the show aired before an at-capacity bar, their excitement over what was to come was palpable as they waited for their segment to come on.

“I was pretty nervous today,” said Mr. Pauze after seeing a teaser for that evening’s episode online.

Added Mr. Floyd: “This is a great turnout and I think that is the biggest thing. People are really interested in us doing something different. We’re in a good spot right now. It has been three long years back and forth, but now we’re right to the point. We can’t say what the ending is, but we are anticipating a really good one!”

The foundation for Pauze and Floyd’s business partnership came out of Floyd’s marriage to Pauze’s daughter. When the father-in-law came up with the invention after cutting his arm working on a drywall project, his son-in-law immediately saw the value in it.

“I thought the concept was great and I thought I would take a chance,” said Mr. Floyd. “It is about backing somebody that you love, care about, and it is something really good.”

While they ultimately went with Arlene’s deal, Mr. Pauze and Mr. Cliff have since cracked the American market, signing a deal last month which will see the Drywall Axe hit shelves in Lowe’s U.S. arm, and at other outlets in the country.

“This company is going to take it worldwide,” said Mr. Pauze. “[Appearing on Dragon’s Den] was more like a marketing standpoint. We got exposure and a lot of people came out tonight.”